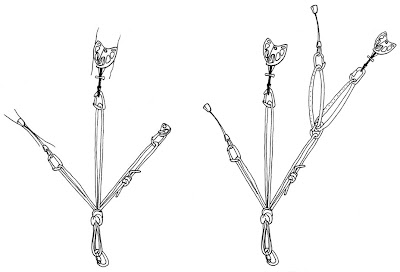 The cordelette (a continuous loop of 7mm nylon cord) continues to be one of the very best tools for building full-strength, redundant anchors. The vast majority of the anchors that I build use the so-called cordelette method, whether they are 2-point anchors or 5-point anchors.


One of the challenges with a cordellete is that its length (usually about 8-10 feet once tied into a loop) can prove to be limiting. A cool trick that I learned not long ago is to use knots to effectively lengthen the cordelette. Study this diagram to see what I mean: 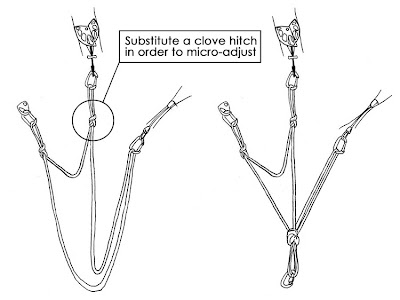 Misuse of the Daisy Chain

Excellent work by Chuck Weber, Quality Manager of PMI Ropes. I found this particularly relevant given my 195 pounds.

What Heavier Climbers Need to Know
Posted by Matthew Fienup at 1:38 PM

Crags on the Central Coast of California are littered with several generations of various types of bolts. One or two walls in particular could be described as a veritable museum of climbing bolts. Knowing what is good and what is sketchy can be more challenging than the crux mantle on T-Crack.

Bolts can generally be separated into three different categories based upon how they work. These three categories are: compression bolts, expansion bolts, and glue-ins.

Compression Bolts
These bolts are larger than the drilled diameter of the hole into which they are placed. They are forcibly hammered into the hole causing the shaft of the bolt to deform and compress. The bolt then springs back elastically and thereby grips the rock. Many compression bolts have an obvious striking service which is visible after placement. Those with a rounded striking service are referred to as “button heads.” Compression bolts are extremely sensitive to the shape of the bolt hole. Functionally, pitons are actually a close relative of compression bolts.

Expansion Bolts
SLEEVE BOLTS
These bolts are tapped into a hole and tightened down with a wrench. As the bolt is tightened, a tapered cone (or “gumdrop”) is drawn up into an expansion sleeve causing the bolt to expand. Be careful as there are three types of sleeve bolts. The type with solid hex-shaped heads, often referred to as "Rawls," are among the strongest and most reliable bolts in medium to hard rock. There are two different types of sleeve bolts that have an exposed, threaded end that sticks out of the hole. One of these is the externally-threaded sleeve bolt, a hardware store variety that is weak and unreliable. The other is the Fixe Triplex bolt, which is one of the best choices for softer rocks.

WEDGE BOLTS
These bolts have a flared bottom-end of the bolt with an expansion clip. They are among the most common bolts in rock climbing. Placement of wedge bolts is hard to botch and they are even self-tightening when placed in solid rock—they expand further and further as they are drawn out of the hole. Be careful as wedge bolts are unreliable in medium and soft rock. There are also hardware-store wedge bolts that are considerably weaker than climbing-specific ones.

Glue-In Bolts
Glue-in bolts are molecularly bonded to the rock. This gives them the highest strength of all three types. They are also reliable in medium and soft rock; however, they require delicate skill to place properly.


Next time you're at the crag, look closely at the various bolts that you are clipping. Study them. Begin to make educated guesses about how each one works. Try to get proficient at identifying each type...as you'll learn, your livelihood may depend upon that proficiency.
Posted by Matthew Fienup at 9:51 PM 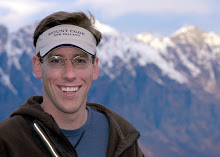